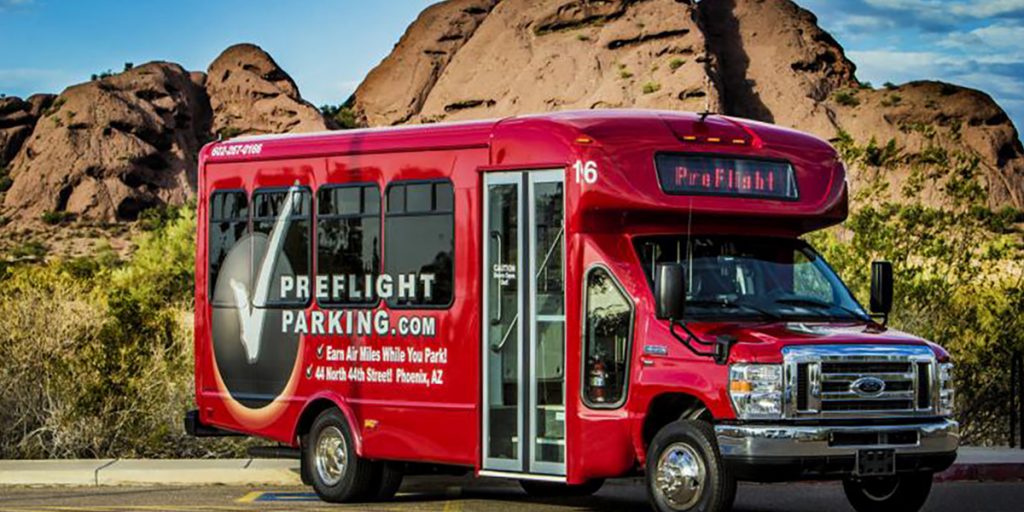 Local airport parking and shuttle company, PreFlight Airport Parking, has converted three of its shuttle buses to propane autogas in an effort to save money and reduce its carbon footprint.

The company first converted three of its Ford E-450 shuttles to propane autogas bi-fuel systems. Three more of the vehicles, which can use either propane autogas or gasoline at the flip of a switch , will be converted by early summer, with the goal to eventually convert all 14 shuttles used at Sky Harbor International Airport. After experiencing technical issues with other fuels such as diesel, PreFlight was ready to make the switch to propane autogas.

“The propane system is much simpler than the CNG system, so our own in-house mechanic can do most of the repair work himself,” said John Walsh, PreFlight market officer. “The price of the fuel was also attractive.”

Avoiding downtime on in-service buses was an important factor to the company in making the switch to propane, both in providing service to its customers and being able to service its vehicles quickly. The amount of time spent repairing complex diesel emissions systems and CNG fuel systems was a constant challenge for the company’s shuttles.

“With diesel, we were having too many mechanical issues around the pollution control systems. They were not designed for the type of driving we do which is low-speed, just to and from the airport,” Walsh said. “The CNG – which we have at several locations-is a lot more expensive and a lot more complicated to service.”

A public fueling station that supplies propane autogas is close enough to not inconvenience the fleet, but the company is also working with Blue Star Gas to install an on-site refueling station. Blue Star Gas, a major supplier of propane in the western United States, introduced PreFlight Airport Parking to propane autogas and helped the company with conversions and training.

“Blue Star Gas provided some ‘How-To’ videos for our mechanic, and helped us get a computer program that we could plug right into the fuel system and it would tell us if everything was running properly or if there were any error codes and what that meant,” Walsh said. “It was probably the simplest training we’ve ever had to do after a new bus purchase.”

Walsh said the company also wanted to incorporate propane autogas into its fleet for the environmental benefits. Propane releases fewer emissions than diesel a nd gasoline. This is particularly important to Phoenix, which has struggled with air quality issues. Reducing emissions with propane autogas benefits the business and the community.

“Reducing emissions during daily operations is especially important to cities like Phoenix where air quality has been a challenge,” said Darren Engle, director of government relations for Blue Star Gas. “Propane autogas allows fleets to achieve emissions reductions and also have the lowest total cost of vehicle ownership of any alternative fuel.