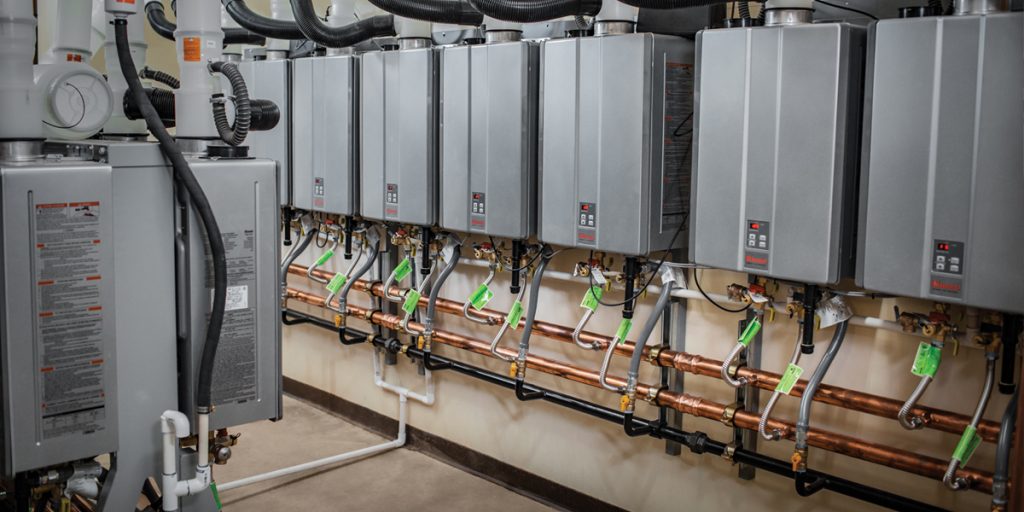 Tankless water heater manufacturer Rinnai America Corporation and one of its dealers have completed Rinnai’s largest commercial project, and the project is fueled by propane. The success of this project ha s led the customer to consider using Rinnai appliances in other applications, and has led other, similar businesses to add propane-fueled Rinnai appliances as well.

How large was the project? It involves a 19-building resort and 214 Rinnai appliances. The resort, Ruby’s Inn, include three hotels, 700 rooms, three restaurants, an RV park, a campground, three swimming pools, and a laundry facility that does 19 tons of laundry per day.

Teams from Ruby’s Inn, Rinnai, and propane sales and service provider Blu e Star Gas worked together to develop, install, and maintain a water heater system that meets the needs of such a facility. The new system provides greater capacity and reliability than the previous system. That, in turns, means a happy commercial customer that is better able to satisfy its customers and save money while doing so.

Ruby’s Inn is located in Bryce Canyon City, just outside Bryce Canyon National Park. Bryce Canyon City is home to only 195 permanent, year-round residents. But on any given day during the summer season, April through October, the city hosts 4000 visitors.

Those visitors, including many who arrive all at once in tour groups, tested the limits of Ruby’s Inn’s previous water heater infrastructure. That infrastructure couldn’t handle so many guests showering at the same time. Plus, there was no redundancy system in place, so when one of the boilers would go down, it would take close to an hour before it could recover. This led to complaints from hotel guests about hot water issues.

“We can have six tour buses check in at one time, so there can be a lot of demand for hot water for showers all at once,” said Ron Harris, health and safety manager at Ruby’s Inn. “I have been here 25 years and we’ve always had hot water trouble.

“We’ve had all kinds of boilers over the years,” Harris added. “When a boiler went down, we would go two hours without hot water. You can imagine how unhappy that made the guests. We were giving away $60,000 a year in discounts and refunds.”

When a boiler went down last fall, Ruby’s Inn ordered a Rinnai rack system to replace it. This was still during the busy summer season, s o the new system was put to the test. Four months later, after the system had passed this test, the operators of Ruby’s Inn decided to add new systems to other facilities. Rinnai put together a proposal for a complete, turnkey solution that includes everything from the initial design and engineering to customer service and tech support.

“Their old system was undersized and very inefficient,” said Michael Prayoonvech, senior application engineering with Rinnai. They had traditional boilers with storage plus some tank-styl e water heaters. When they rolled up the door to the boiler room, you would feel the heat right away. As an engineer, when you feel that amount of heat, you know that system is inefficient. Their old system was only 50% to 60% efficient.

“Another advantage we have with tankless is, if a person wants hot water at 2 a.m., we can heat just enough to provide what is needed at that time. With the older system, you don’t have that; you fire up a whole boiler to provide just that small amount of hot water. That i s inefficient, and the savings there can be huge.”

“People know that storing water and heating it and reheating it is not efficient; it is more efficient to heat it only when you need it,” he added. “The tankless technology does not necessarily sell itself, but people do understand that there will be a savings there. If you are at 60% energy efficiency and I’m at 100%, you can cut your energy bill by 30% to 40%. The capital cost is higher up front, but look at what you will save over the year.”

The Rinnai appliances used in the Ruby’s Inn project are fueled by propane. The location is very remote, so natural gas is not an option. There is no gas line within 25 or 30 miles. The resort is fueled by a 30,000-gallon, and an 18,000-gallon propane storage tank .

“The only other option here is electricity, which is much more expensive than propane,” said Ron Harris of Ruby’s Inn. “Natural gas isn’t even close to us. We’ve tried solar, but it is not an option for the kind of demand we have. We go through 425,000 gallons of propane per year.”

Steve Rutherford of Blue Star Gas said, “We did it all in-house; there was no contracting. That is what Ruby’s Inn wanted. They knew I would be here in the long run, because I am here all the time maintaining the gas system. That is a big deal when you are this far from everything.”

Rinnai’s commercial team projects that Ruby’s Inn will save $6000 per month on propane alone due to the energy efficiency of the new system. That total doesn’t include the savings in many other forms.

“That ROI includes only the dollars saved on fuel; it doesn’t include the money they would have lost replacing units that failed, inspecting old equipment, resolving customer complaints, or getting bad reviews on social media,” said Carlos Rodriguez of Rinnai.

Ruby’s Inn reports that, since the installation of the Rinnai hot water system, it has experienced no lack of hot water and no customer complaints. For those who maintain the facility, the new system’s reliability has freed up time and money that ca n be better spent elsewhere.

“With the old system, we spent three or four hours a day just checking the boilers,” said Karl Munford, facilities manager at Ruby’s Inn. “Now, it takes only 20 minutes a day to check that everything is working. That frees our people up to do other maintenance around the hotel; I always have other projects for them to do.

“To turn it on and know it is going to work every time – that is a good feeling,” Munford concluded. “Every one of the new units has worked the first time. You flip the switch and you get hot water. Before, with the old boilers, you would hope it fires up and then you would wait 20 minutes to get hot water. This new system is so much different than what we were used to. It is so much easier and so much more gratifying.”

Steve Rutherford of Blue Star Gas said, “Propane customers know we are progressing with the times. We need to move forward with new technologies . When they replace aging equipment and reduce their energy costs, they have more capital they can spend to grow. At the end of the day, it’s about your customers. You have to keep their interests in mind. If you take care of them, they will take care of you.”